So, my little man has recently moved from a rear-facing to a forward-facing car seat.  He LOVES it.  But, seriously, who wouldn’t?!?  Staring at the seat back every time you go anywhere in the car… BORING!!!  Well, with his new car seat the straps look like they dig into his poor little chubby neck.  So, car seat straps to the rescue.  Now, we had one pair that we used on his infant carrier, but we invested in 2 car seats (one for our car and one for my mom’s car).  The strap covers we had before came from Wal-Mart and were a whopping $4.  Unfortunately, that was at a Wal-Mart in Idaho and I couldn’t find any here.  So, I decided to just make them.  And it meant I got to cross it off My To-Do List.  Yay! 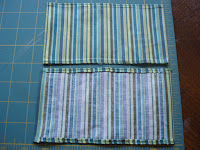 First, I cut two identical sized pieces of fabric.  If I were to do this again, I would make them about and inch or two longer.  That’s what I get for being too lazy to measure I guess.  Then I pinned them to hem, allowing an 1/8″ seam.  Hmm, maybe my subconscious knew they were too short from the very beginning…?  If you make them longer, you can allow for a bigger seam.  Then, I hemmed all the long sides.  Iron the seams and short edges of the fabric flat.  It makes it a lot easier to put on the Velcro if the fabric will lay smoothly. 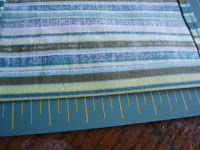 Next, fold the short edges of the fabric in 1/4″ to 1/2″.  Use a strip of Stitch Witchery to “glue” the fabric in place.  I hadn’t used Stitch Witchery in so long I forgot how awesome it is, definitely something I won’t be without in my sewing supplies ever again… but I digress.  If you’ve never used it before just follow the package instructions.  It’s pretty simple.  However, I will reiterate to place a paper towel between you fabric and your iron.  You don’t want to get glue on your iron! 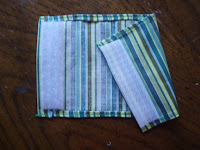 Next, take a strip of Velcro, cut to size, and pin it on top of one of the raw edges that you just glued down.  I prefer Velcro with an adhesive back, it seems to help it stay in place while I’m sewing better than just pinning it.  I stitched around the edges of the Velcro, although you could just use some heat and bond if you want a no-sew solution.  And, since your raw edge is underneath the Velcro, it wont fray.  For the other side where the Velcro won’t cover the raw edge, I just did a quick seam to help hold it together before I sewed the Velcro down. 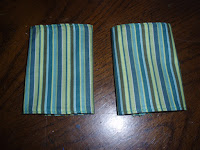 And, Ta-Da!  You’ve made a pair of cute, simple car seat strap covers!  Easy peasy, right?  Just a side note… These are not padded.  My little boy still has a lot of his baby fat in his face and the padded set we have sometimes seemed to squash his face when it was getting close to needing to readjust his straps.  If you want a set of padded covers Serena at Nap Time Crafts has an awesome tutorial on how to do that.  She’s got a lot of other cool stuff too, so if you don’t know her blog yet I highly suggest you check it out!  Have fun!