Not sure where I found the idea for this, but I did it the first Halloween we were married and it has since become tradition.  Some time in October we HAVE to eat Spiderweb Nachos!  YUMMY!  I usually just make one big plate and me and My Mr Right share, but this would be super easy to break into smaller portions and make individual sizes. 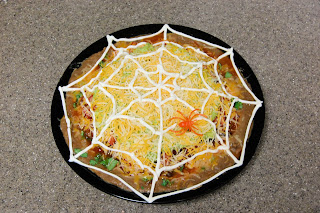 30 or so Tortilla chips
1/4 c of cheese (I use whatever is in the fridge)
1/2 can of re-fried beans
2 Roma tomatoes, diced
1 avocado, sliced or diced
chopped cilantro, optional
1/4 cup sour cream, in a zippy baggie
Layer the chips, re-fried beans, cheese, tomatoes, avocado and cilantro on a baking pan.  Put in the oven at 250 degrees for 5 minutes.  Just long enough to heat everything up and melt the cheese.  You can also put it on a plate and nuke it in the microwave for 30-45 seconds.  I’ve done both and both work.  If you use the oven method, transfer your nacho heap to a plate.  Take the sour cream in your zippy bag.  Cut the corner off.  Not too much, though.  It’ll make a bigger hole than you think.  At least it always does for me.  Draw the spokes of the spiderweb in a star shape.  Start in the middle and begin connecting the spokes with a droopy line to make the web.  Go all the way around and then do the same on the next layer, until you have run out of nachos to draw on.  Enjoy!