So, remember when I mentioned all those crazy Christmas gifts I was trying to finish up so we could deliver them on our trip?  Well, hold your hat on, ’cause here comes a whirlwind of gifts ideas!  All of these have already been delivered and I don’t think I actually wrapped any of them, so I’m not ruining any surprises.  I’ll include price estimates, as well as time estimates, for each project.  At least I’ll try.

The first gift idea was not the first one we gifted, but it ended up being one of my favorites.  It was simple, but turned out cute.  Which fits our giftee’s decor pretty well.  Not too much, but definitely noticeable. 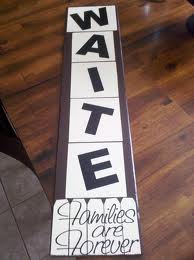 1)  I used a piece of 1″x6″ that was 24″ long.  I primed the board and then painted it brown with acrylic paint.  Then I sealed that all with Mod Podge.

2)  I cut out five squares of ivory card stock that would fit onto the board and fit the letters I cut out.  I used vinyl for my letters, but paper would work just as well.  The size of the squares and letters will be determined by the length of the name you are spelling.  Mine were about 4.5″ square I believe, and the wide one was something like 5″x4.5″. 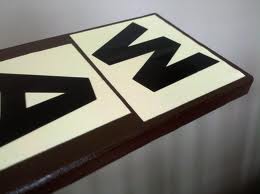 3)  I stuck the letters to the card stock and then glued the card stock to the board.  I just used Mod Podge, but the next time I use card stock I think I’ll stick to Tacky Glue.  The paper bubbled really bad, but I’ve never had that problem with Tacky Glue.  Maybe some of you are smarter than me and can clue me in on how to avoid the bubbles? 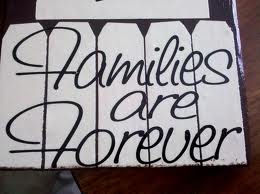 5)  I cut “Families are Forever” out of vinyl as well.  I stuck that on over the picket fence.  And Mod Podged over that too.  Then give the whole thing one more Mod Podge coat.  Install wall hanging hardware and hang.

Time:  This project probably took a total of two or three hours.  But, probably an hour and a half or so was drying time.  Gotta love drying time, right?

The vinyl for this project is available in my Etsy Shop, if you’re interested.  Just shoot me a convo and I’ll set up a custom listing for you.