Have you checked out the Summer Daze Giveaways Sneak Peek?  Come find out what all the fuss is about!

I have been playing single momma for the last couple weeks.  I don’t know how you ladies do it!  Whew!  I am exhausted.  And craving conversations not about Lightning McQueen, Blanket, or trying to explain (to the wall, it seems like) why “big boys only get binkies at night-night”.  We’ve also had some cool weather again… cold enough that we’ve had to stay inside.  ICK!  Little Monkey is going stir-crazy and he is driving me up the walls!  So, I’ve been on the prowl for new things for us to do.  Recently, we tried Play Dough.  IT WAS A HUGE HIT!

Little Monkey loves it!  I strap him in his booster chair, hand him a chunk of play dough and some cookie cutters and he’s good.  For like at least half an hour.  HEAVEN!  And because he’s strapped in his booster chair, I don’t have to stand there and watch him closely for signs of mischief.  And, he’s only shirtless because we’d just had ravioli for dinner, not because the play dough is messy, ‘cause it’s not.  Wow, that was a lot of commas in that sentence (run on, much?!).  All of my past English teachers and professors would die.  =]

I have this book, titled The Toddler’s Busy Book, by Trish Kuffner.  Someone gave it to me, but I don’t remember who.  There’s also one for pre-school aged children too.

I have an abbreviated version… only 101 things to do with my toddler.  Not the 365 as claimed in the photo (which, by the way, if you click on, will take you to the source).  My favorite part of the whole book… the back has recipes for all kinds of stuff, including play dough.  Yay!

Ingredients:
1/2 cup water
1/2 Tbs vegetable oil (I actually used olive oil, as I didn’t have vegetable oil)
1/4 cup salt
1/2 Tbs cream of tarter
Food coloring (or 1/2 tsp of cocoa – the food coloring I thought was in the cabinet, wasn’t.  Guess we left it at Grandma’s.)
Saucepan
1 cup flour

Directions:
Combine the water, oil, salt and cream of tarter in the saucepan.  Heat until warm, not hot.  Remove from heat, add about 1/4 cup of flour and mix.  When the mixture is cool enough, knead more flour into the dough until it’s not sticky.  You may need more or less than the whole cup.  Store dough in an airtight container or a zippy bag (suck the air out).

Here’s the message we sent to Daddy: 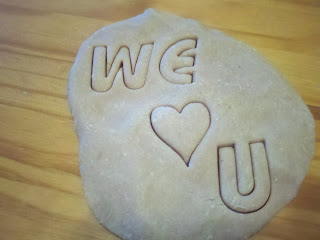 The cream of tarter makes this dough last 6 months, so don’t skip it if you don’t have any.  This dough is SUPER salty, but it won’t hurt your kiddos if they eat it.  And it’s so salty, they won’t eat much.  I promise.  P.S. Don’t lick the dough off your fingers.  BLEH!  Ask me how I know…  =] 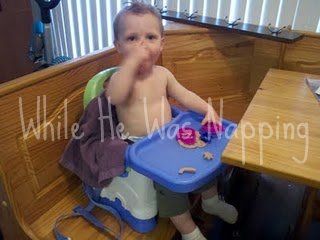 The only picture I could get with him looking at the camera… you ask him “What does a nose say?”  “Honk, honk”.