Summer is in full swing, and even winding down.  Are you trying to squeeze in a few more fun days before school starts back up?  We are.  We spend many of the evenings outside, when the temperatures drop to bearable.  The constant, crazy heat always means more bare skin.  We all have unwanted body hair.  Every single one of us.  And, these days, we don’t have to just live with it.  Regardless of where the hair is at on our bodies, there are ways to get it off.  But, which way is best?  Let’s take a look…

Shaving is simple, fast and cheap.  It’s generally pain-free, except for occasional nicks and razor burn.  A sharp blade and shaving cream can help reduce these occurrences.  I have tried both the expensive creams and razors and the cheap ones.  As long as you’re careful, it doesn’t really seem to matter which brand.  Although I do prefer a razor with at least three blades.  Because shaving only cuts the hair off at the skin, stubble develops within a couple days and needs to be repeated frequently.  But, I’m sure that’s not news.
Shaving works best on the legs and underarms.  Some women also shave the bikini line, although waxing will give longer lasting results (which, in my opinion is worth it, especially during swimsuit season).  Women should never use a razor on their face. 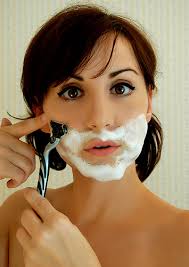 Waxing works well on all body areas, from head to toe.  Waxing isn’t particularly cheap, but home kits are definitely affordable.  Doing your own waxing will take longer, especially if you’re inexperienced, than having it done in a spa or salon.  Sugaring is a variation of waxing.  The pro to sugaring is that it washes off with water.  Waxing is quite painful, especially the first few times.  Waxing typically lasts 3-6 weeks.

Tweezing is a great way to maintain your already waxed skin.  Tweezing the eyebrows in the most common use.  Hair must be long enough to grasp between the tongs.  You don’t need to spend $10 on a pair of tweezers.  I find the La Cross brand to work well.

Shaving, waxing and tweezing are the most common and affordable methods.  Threading is steadily growing in popularity.  There are some other, more permanent, methods as well.

Laser hair removal works best on dark hair and light skin combinations.  I’ve never had laser hair removal, but I hear the pain is less than waxing, but more than tweezing.  Kind of like a rubber band being snapped against your skin.  Laser removal takes about 10 minutes, but you will need 5-6 sessions to complete the treatment.  Laser hair removal isn’t cheap.  Typical prices run anywhere from $150-$200 a session.  And treatments are only about 80% successful.

Electrolysis is much more successful than laser removal because it actually kills the hair follicle, instead of just targeting the dark color like a laser does.  Electrolysis focuses on one hair at a time and, because of this, can take a large amount of time.  It’s ideal for smaller areas due to the tediousness of the process.  I’ve also never done electrolysis, but it’s supposedly more painful than laser removal (which didn’t sound all that fun to me anyway…).  It’ll cost you a pretty penny too, as the typical fee is $60 for a 30-minute session.  The con is you need about 15-30 visits to see the best results.  Ouch!  Physically and for the pocketbook.