I’m just going to cut right to the chase here.  That way we can get to the really good part!  Stenciling.  Ever tried it?  I had done little stencil projects, but nothing that involved an entire wall or anything.  What I knew about stenciling could fill… a very small container.  Pregnancy brain is making me draw a blank at the moment.  Anyway, I saw a few other blogger that had used stencils in some of their projects and they had some impressive results.  But, they were bloggers that had built their own furniture and taken on some projects that I never would have (especially nine months pregnant!).

And then I got an email.  Cutting Edge Stencils wanted to know if I’d be interested in reviewing one of their products.  Since we’re renting, my first thought was “not in this house.”  But, while we were at my parent’s house for dinner, my mom brought up an idea she had for her bedroom.  She wanted to put a large tree on the wall and make it a Family Tree.  Then she turned to me and said “You’re the creative one.  Do that for me, ok?”  I had that deer-in-the-headlights look for about ten seconds and then remembered that email.

First off, let me say that working with Cutting Edge Stencils was fantastic.  They were quick and responsive and so willing to work around my crazy, hectic holiday schedule.  Shipping was fast and everything arrived in great condition.  I would definitely order from them again.  Not only that, their variety and selection of stencils is fabulous.  They really do have something that will appeal to everyone.  I knew I was looking for a tree; but, even then, it was hard to choose which tree!  And, one of my favorite things about stencils is that they are re-usable.  So, even though this was done in my mom’s house, I can use this again some day when we have a cute little nursery to decorate, or a sunny entry way, or somewhere else in our home – when we get one…

So, I got this awesome box and was totally excited to check it out.  But, due to the aforementioned holiday craziness, the box sat in my parent’s living room for a couple weeks… It didn’t occur to me to unroll the stencil… fortunately, it didn’t cause any major issues or damage to the stencil.

Now, I’m no pro when it comes to stenciling.  Cutting Edge Stencils provides some great how-to videos to help those of us who are less than experienced (or completely clueless, like me).  These were super helpful, so don’t be intimidated.  These videos will walk you through it, step-by-step.

After the crazy died down, we set aside a day and planned to get this tree on the wall.  We used Valspar paint samples from Lowe’s.  My mom chose a brown for the tree trunk and branches and two shades of green for the leaves.  The paint samples were more than enough to cover the entire stencil.  And we spent most of our day trying to decide on which colors.  My mom is a little OCD and indecisive… not a productive combination. 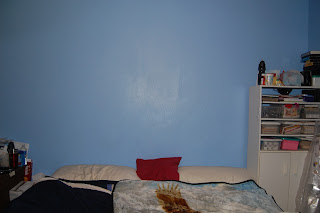 This is the wall before

.
The first part of the stencil was super easy to put up and paint.  It’s suggested to use a paint roller, which i did for the tree trunk.  I ended up using a sponge brush for the smaller branches and leaves though so I had better control over what colors went where.  After I did the first part, I made my mom wait for 15 minutes so the paint wouldn’t drip or leak.  Apparently, that’s where I get my patience from (or lack thereof). 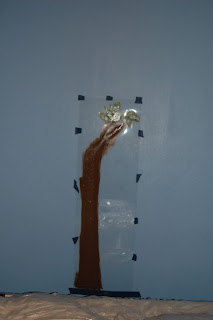 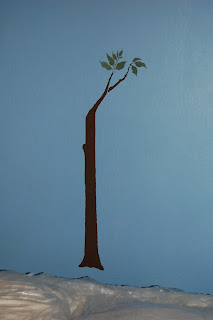 The second part of the stencil was a little more difficult.  We had to line up the trunk of the tree, but that part was pretty easy.  Because the top of the tree was all one stencil it was pretty big.  That made it was so large and had a lot of bridges and detail, it was hard to get everything to lay flat on the wall all at once.  I ended up doing the top in two sections.  I got the left part laid down and then painted.  Well, mostly.  The stencil fell off the wall once and we had to re-align it.  {Note to self: splurge on new painter’s tape…}  We let that dry overnight (mostly because it was after 9pm and I’d decided I had smelled enough paint fumes for the time being.)  We took the stencil down for the night.  I came back the next day and we re-positioned the stencil, lining it up in the middle and working outward to get the right side to lay well.  It worked out just fine. 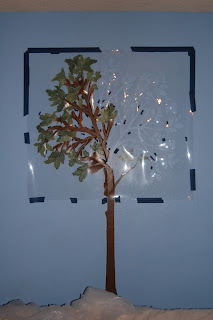 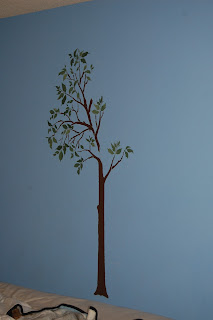 TA-da!  This is the finished stencil.
My mom has since gone back in and bridged all the gaps.
OCD, remember? 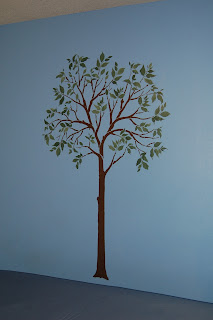 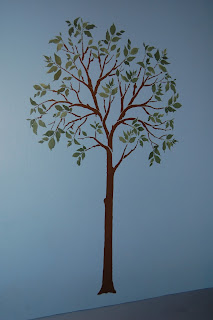 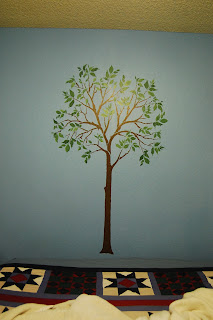 The total time I spent painting was maybe two and a half hours.  It took probably about an hour or so to do the lay out of the stencil.  Laying down the bottom piece was super easy.  The top piece took a little longer (especially since we had to put it up again after it fell down).

The only things I didn’t love about the actual stencil was that it was clear.  I’d make it in a semi-frosted finish.  The clear stencil made it a little difficult to tell if I’d gotten all the pieces.  A semi-frosted finish would have made it a little easier.  This particular pattern may have been easier if the top of the tree had been two pieces instead of one big one, but it all worked out okay.  However, for a first time project, I’m happy with the way it all turned out.

Overall, it was a pretty easy project.  The results aren’t perfect and I will go back {eventually} and paint over the bridge gaps to make it a solid image.  The leaves on the tree were awfully forgiving and I didn’t worry too much about seepage or drips under the stencil.  We just call it ‘nature’s imperfection’.  There are some places I will have to go back and clean up a little.  But, if my OCD mother can deal with it, then I’d call it a success!

Now, here’s the really fun part!  Cutting Edge Stencils wants to give one lucky While He Was Napping Reader the opportunity to try their hand at stenciling.  One winner will receive their stencil of choice (up to $50 in retail value).

I’m trying out Rafflecopter with this giveaway.  Simply select the entries you wish to complete, make sure you complete all steps in any multi-step entries and fill in any additional info required.  Submit and you’re good to go.  Let me know if you’re having problems with it.  I’ve entered a few giveaways with Rafflecopter before, but I’ve never hosted one with them, so… Thanks for being my guinea pigs.  =]  Good Luck!

P.S. Sorry you have to click the “Read More” link to get the entry form… I’m trying to figure out a way to make it show up without doing that.  If you know, clue a girl in, please?