I made this while pregnant with Little Monkey, so I don’t have a lot of process pictures.  There are lots of mommas that swear by the Boppy.  I was all for it.  Until I saw the price tag.  When we were looking at these, we had a great big long list of baby stuff we needed and didn’t have an extra $30 for a Boppy.  So… I made my own.

Directions-
1.  Cut one of the sides of your pillow open and pull out all the stuffings.  Set aside, you’ll need it later.  Decide what shape you want your supportive pillow to be.  I made two pillows (what else was I supposed to do with the other pillow?), one was a donut-shape and the other was a blocky U-shape.

2.  Cut the pillow casing to your desired shape and stitch it up.  Leave a hole that you can turn the pillow through as well as stuff it.  Go ahead a leave a decent sized hole to make things easier on yourself. 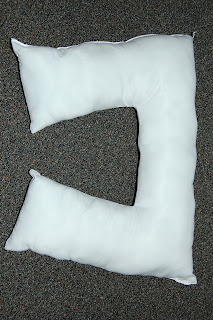 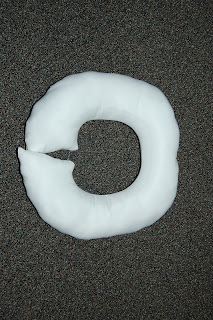 3.  Stuff your pillow.  I used all the stuffing that was in the pillow to begin with.  In the U-shaped pillow, I wish I’d stuffed it fuller.  It was great at first, but flattened after a while.  The donut-shape pillow was a little fuller than it needed to be.

4.  Sew the opening of your pillow shut.  That’s it.  Ok, that’s not it.  I made removable pillow cases for my pillows so I could wash them.  Which was the best thing ever, because I can’t tell you how many times spit up, breast milk, formula and other baby liquids got on these. 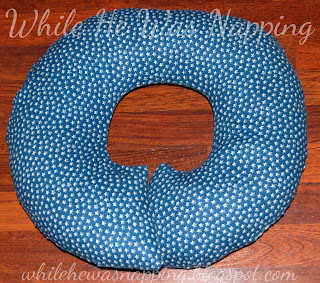 This pillow you have to push all the way through the cover, as it opens on one of the ends.  I did the U-shaped pillow with a strip of velcro on the long side.  It was WAY easier to get the cover on and off.  Which  made washing it not a big deal.  The circle shaped pillow didn’t get washed as often…

5.  To make the covers, I just traced around the pillows, added some seam allowance and sewed it up.  I used velcro to seal the covers over the pillows.  It’s not super pretty, but it’s definitely functional.  And $10 bucks for two Boppy knock offs vs $30 for one Boppy without a cover.  I’ll deal with the imperfections.