I finished the big creation of this project about six weeks ago, but it’s an on-going work of art that requires daily care.  It’s one of my very most favorite projects and I love it to pieces.  I couldn’t be happier with the way it’s turning out.  Meet our Little Gator. 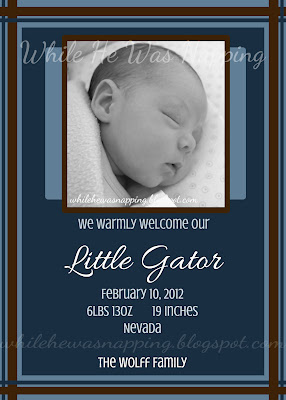 This little man is six weeks old now.  He was a short, very intense four-hour labor.  Even with the epidural, my contractions about had me through the roof.  If it hadn’t been for the ginormous needle, I wouldn’t have been sure I had an epidural, as my contractions never really eased up after they put it in.  I was induced, but both of my nurses, my doctor and the anesthesiologist all said I probably would have been having him that day with or without the extra help.  Thank goodness it was over in four hours, instead of the eight hours it took Little Monkey to make his entrance (which is still pretty short, especially for a first-timer). 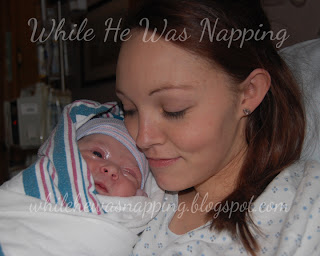 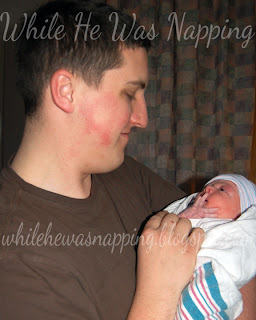 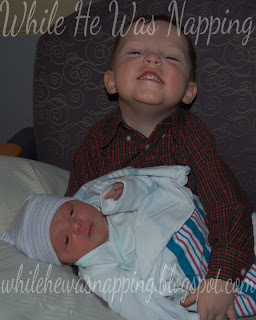 We spent about 27 hours in the hospital after Gator was born.  That first night was the longest night ever.  We didn’t get to bed until after 1am and I was woken up every two hours after that.  A vitals check, blood draw for labs, sending Gator back because he wouldn’t stop crying in the nursery.  He just wanted to be held and, apparently, the nursery nurses didn’t want to hold him.  Maybe they really did have other things going on, but as a sleep-deprived, exhausted new momma, I was a little irritated that they sent him back to me at 4am.  He wouldn’t sleep unless he was held and they wouldn’t let us co-sleep  Another vitals check, breakfast (btw, I’d forgotten how gross hospital food is), hearing tests on Little Gator, more blood draws, ect.  Like I said, LONGEST NIGHT EVER! 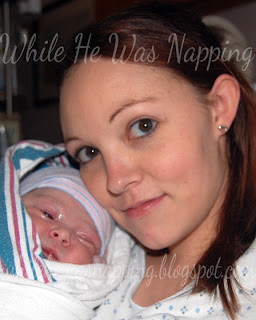 They weren’t hesitant to let him go, but me.  I’ve always had a problem keeping my iron levels up and tend to be rather anemic after labor and delivery.  My discharge doc wasn’t my doctor and she was a little worried I’d hemorrage.  I didn’t have a lot of blood loss during or after delivery, but the iron level from my labs and my blood pressure worried her.  It was awfully frustrating, since I felt fine, but better safe than sorry, right?  Ironically enough, they kept doing blood draws to check my levels.  I looked like an old, ragged, over-used pin cushion when I left. 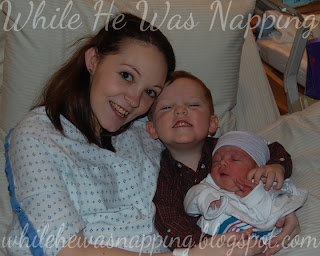 Little Gator now tips the scales at over 10lbs.  He’s got dark hair and blue-brown eyes.  His toes are extra long and his belly button is still a bit of an outie.  We’ll see if it ever recedes or not.  His hands aren’t as wide as Little Monkey’s (that boy’s got paws, I tell ya) but they are still wider than most baby hands.  He is an awesome sleeper and I can usually get at least a five hour stretch at night.  This boy is going to eat us out of house and home.  He has his daddy’s appetite {and temperament when he’s hungry}.  Luckily, this time around, I seem to be able to keep up with his demand, which really helps the pocketbook.  Little Gator is already showing us his spunky personality.  He has started smiling and cooing more and each and every one melt this momma’s heart. 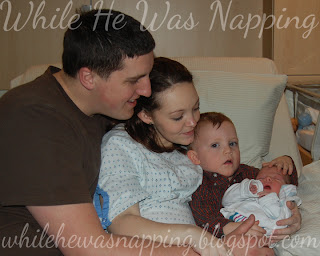 Little Monkey was less than an hour old when I told My Mr Right that we needed to have more kiddos.  Little Gator was about a week and a half old before I was thinking about more.  Now that we’re passed those horrendous first couple weeks, I know there are more little ones in our future… but it’ll be a little while before I jump back on the preggo wagon.  My Mr Right and I often joke that children are so cute when they sleep so that you won’t kill them when they’re awake… Some days, I think it’s a totally valid point.  And Dan Herold was right on the money when he said “babies are such a nice way to start people”. 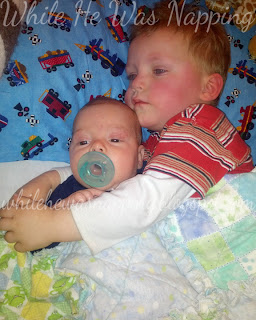 Welcome to our family, Little Gator.  I’m so excited and blessed to be your momma.  I can’t wait to watch you grow.